EDID is an acronym for Extended Display Information Data.  EDID was originally implemented by computer monitors with DVI inputs to present its display capabilities to a video card so a compatible video resolution could be ouput  to the attached monitor. EDID is also used by HD Displays via HDMI to identify the HDTV display and audio capabilities to consumer video sources.

EDID is programmed by Display manufactures to specify model , manufacturing date and the Display capabilities such as resolution support, and audio capability. A rudimentary example of a EDID is shown below: 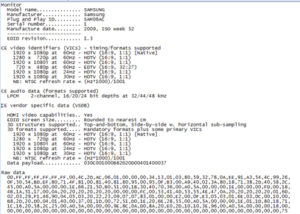 The Raw EDID shown is read by the source player and is interpreted as: ” I am a Samsung LED tv, I am capable of displaying 3D video and 1080P video resolution. My audio capabilities are 2 ch PCM only .” Once the EDID is read by the video source, the video source can be configured so the source will not send video or audio that exceeds the capability of the attached display.

EDID typically include 256 byte of data and stored in a PROM inside the display and communicates to the the video source via I2C bus. One can use a EDID reader such as Monitor Asset Manager from ENTECH to view a display’s EDID.

Latency of Video Over IP